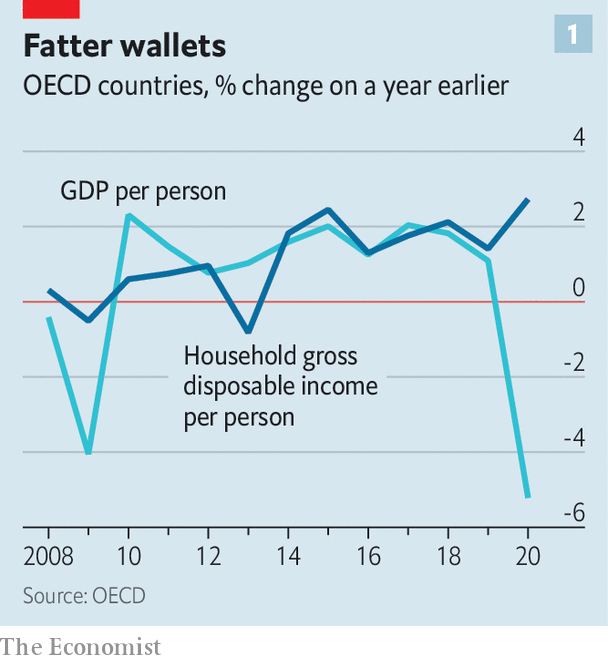 Will the economic recovery survive the end of emergency stimulus?

IN “GAME OF THRONES”, a fantasy drama, a duel takes place between Khal Drogo, a fearsome warrior, and a rival. Khal Drogo comes off unscathed from the brutal battle, suffering only a scratch to his chest. But the wound festers, gradually weakening the fighter. A few scenes later, Khal Drogo falls off his horse and eventually dies.

Many economists worry that economies in the rich world could face a similar fate. The past 18 months of lockdowns have left surprisingly few economic scars. A brisk recovery is under way. But has the damage from covid-19 been avoided, or merely deferred? As government stimulus schemes put into place last year come to an end, the question may soon be answered.

When they first imposed lockdowns, governments in the rich world introduced a raft of measures to support firms and households, from doling out stimulus cheques and setting up furlough schemes to offering low-interest loans to businesses and announcing moratoriums on tax, interest and rent payments. Many of these are now coming to an end, or have done so already. In the euro area at least three-quarters of debt holidays have expired; in Germany an insolvency moratorium ended in April. In America half of states are abolishing a $300 weekly top-up to unemployment benefits in June and July; the rest follow in September. A federal moratorium on evictions ends on July 31st. Britain’s and Canada’s job-retention programmes end in the autumn.

Taken together, all these schemes have been remarkably successful in preventing much of the economic scarring usually seen after a recession. That is not to deny that many people have suffered deprivation; global extreme poverty, for instance, has risen sharply. Yet in the rich world overall family finances look surprisingly strong. Real disposable income per person rose by 3% in 2020 even as GDP tanked (see chart 1). Government spending on extra unemployment benefits and cash transfers, which came to 2.3% of rich countries’ GDP, undoubtedly helped. In America the poverty rate has risen only slightly from 10.7% in January 2020 to 11% in June this year, albeit with oscillations in-between.

Resilient household finances ensured robust demand for goods and services even in the depths of lockdown. That, plus a series of rescue measures, means that firms too look unscathed. In stark contrast to usual recessions, business bankruptcies did not soar but fell sharply in most rich countries last year (see chart 2).

The uncertainty now is how this picture will change once stimulus ends. In a recent report the Bank for International Settlements, a club for central bankers, identified a “wave of firms’ insolvencies” as a “big question-mark clouding the outlook”. There are three areas of concern: that reduced cash transfers cut household incomes and hit spending; that the end of job-protection schemes puts millions out of work; and that a host of deferred bills and debt repayments comes due, crimping spending or forcing bankruptcies.

Consider cash transfers first. Just as unemployment insurance is becoming stingier in America, Britain too is reducing its main welfare payment by £20 ($27) a week. Some people will surely reduce their outgoings as benefits are pared back.

Yet overall spending may not suffer much. Households in aggregate have saved far more than normal (see chart 3). Our analysis of OECD data puts the level of “excess” savings across the club of mostly rich countries at $3trn, worth a tenth of overall annual consumer spending. The big worry about consumers in 2021 is not that an already large cash pile is no longer being topped up, but that people choose not to spend their savings.

The second concern relates to job-protection schemes. Research by UBS, a bank, suggests that roughly 5% of employees in the four largest euro-area economies and Britain remain on these programmes. If they cannot find work once the schemes end, the average unemployment rate across the five countries will exceed the peak seen in the global financial crisis.

Whether or not this happens depends in part on how strong spending, and thus demand for labour, proves to be. In May the Bank of England expected joblessness in Britain to increase “only slightly” after furloughs end, in part because of a “stronger projection for output”. But the fate of unemployment also depends in part on how many people work in sectors that consumers no longer want to or cannot patronise.

Here Australia offers hope. Its job-retention scheme, which a year ago was supporting 3.5m people, ended in March. Since then the unemployment rate has dropped to its lowest in a decade. Nine out of ten people on the scheme have moved back into work. As in many rich countries the problem in Australia is not an abundance of labour but a shortage. The pandemic has created new demands and job vacancies, which are proving hard to fill.

The third concern is perhaps the most significant—and is also the hardest to judge. It relates to bills that are due but as yet unpaid, from taxes and interest to rents. These are extremely difficult to measure. Although companies rushed to borrow and issue debt early on in the pandemic, indebtedness has grown less rapidly since. But it is far from clear how company or national accounts treat bills that are overdue or deferred.

Game of loans
Debtors themselves may not know where they stand. Non-payment of rent by American businesses in 2020 “occurred privately and in a somewhat disorganised way”, according to a paper by Goldman Sachs, a bank, leaving “lingering disagreements about whether rents have been truly abated or merely deferred”. Estimates of the “back rent” owed by American households to their landlords vary by a factor of six.

The scale of the problem may be manageable in aggregate. Take commercial rent in America. Estimates of unpaid rent vary, but a report by the city of San Francisco reckons that local businesses failed to pay up to $400m in the nine months to December. Scaling that up as an inevitably rough guide suggests missed rent of about $30bn in America as a whole—about 3% of annual commercial rents paid in a normal year.

So far the evidence suggests that bills are being largely repaid. In Britain over 80% of households taking out deferrals on mortgage payments have since returned to full repayments, suggesting many people may have made use of the scheme out of caution rather than need. In the eurozone loans emerging from moratoriums have performed only slightly worse than the rest of banks’ loan books thus far.

But as with so many things in the pandemic, the likeliest outcome is that withdrawing stimulus will hit people at the bottom hardest. Cutting welfare may push some people into poverty and in America, millions of renters could face eviction. The least productive firms might go bust. In 2020 governments were quick to introduce universal, generous stimulus schemes. The task now is to scale those back and enable creative destruction, while still protecting those in need.