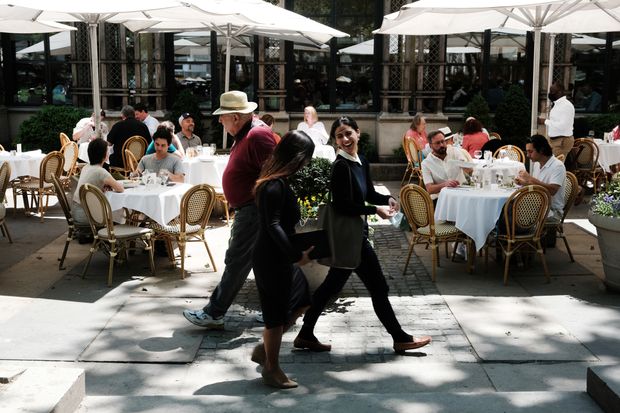 
Treasury yields climbed Thursday after a couple of economic data points indicated a continued U.S. recovery and amid reports that a coming budget proposal from the White House would, if adopted, boost federal spending to the highest levels since World War II.

Yields got a temporary boost after 8 a.m., when the New York Times reported on documents detailing a $6 trillion budget proposal from President Biden, reportedly set to be released widely Friday. The plan to improve infrastructure and expand the social programs would lead to annual deficits above $1.3 trillion over the next decade, according to the Times’ report.

But the rise in Treasury yields was small—about a basis point—and quickly exhausted itself. The White House’s budget proposal is an opening request, and the actual budgeting process is carried out by Congress, where Democrats hold a majority.

The benchmark 10-year note’s yield climbed nearly three basis points (hundredths of a percentage point) to 1.61%. Yet it remained well below this year’s peak around 1.75%, and didn’t exceed levels from earlier in May.

Economic reports on durable goods and jobless claims may also be supporting yields. There were fewer initial claims for unemployment insurance than expected:  406,000 people filed claims in the latest week compared with economists’ forecasts for 430,000, according to Factset. And excluding transportation, durable goods orders rose 1% in April from the month before, slightly exceeding forecasts for 0.7%.

On balance, however, the data were mixed. Including transportation, durable-goods orders fell, missing economists’ forecasts. Pending home sales missed forecasts as well. Supply pressures may also be weighing on Treasury prices, which fall as yields rise, as investors prepare for a $62 billion 7-year auction Thursday afternoon, following auctions of 2-year and 5-year notes earlier this week.

Broadly, bond-market trading may be quiet Thursday, as the Memorial Day holiday approaches and bond markets head into an early close on Friday.

In fact, trading costs indicate that 3-year to 5-year bonds are the least liquid since the late December holidays, according to strategists at

That may be because of the approaching holiday weekend. It may also be because of a market mispricing:  The strategists argue that the Federal Reserve is likely to raise interest rates faster than traders expect once officials do start tightening policy.

Every weekday evening we highlight the consequential market news of the day and explain what’s likely to matter tomorrow.

“While the Fed’s new monetary policy framework implies a later start to the cycle there is no commitment to hiking at a slower than normal pace from that point on—in fact one could argue that with inflation running above target at the time the Fed might be forced to hike unusually aggressively,” the bank wrote.

In other words, while the Fed still may not raise rates for a couple of years, it may raise rates more quickly once it begins. In a May 27 note, the bank wrote that risk isn’t being reflected in the part of the Treasury market that would be affected most by a quicker ultimate pace of rate increases:  3-year to 5-year fixed-rate debt.

“Investors should be more concerned especially about allocating duration to the 5-year sector. Perhaps that makes everyone—including dealers—less inclined to provide liquidity there, which may well help explain the decline in liquidity,” Bank of America wrote.