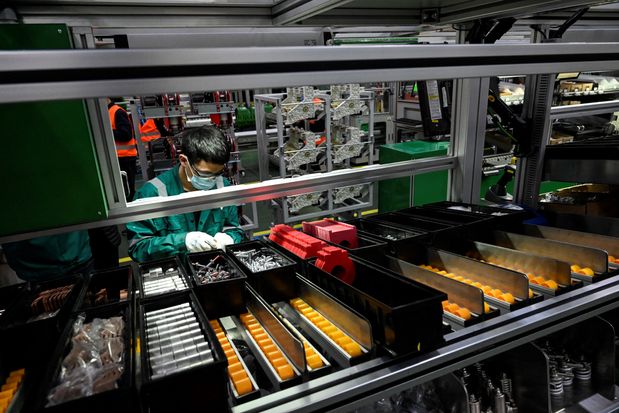 Coming monthly manufacturing data will reveal how much of a recovery there has been in the world’s second largest economy after a spring of coronavirus-related interruptions and lockdowns.

China is set to release its manufacturing purchasing managers index for June during local hours on Thursday, and most analysts expect the official number to show that the sector expanded for the first time since the spring pandemic outbreak. Economists surveyed by FactSet expect a reading of 50.6%.

Craig Botham, chief China+ economist at Pantheon Macroeconomics, wrote this week that he expects a reading of 50.5% in June, up from 49.6% in May.

A number above 50 indicates growth in the manufacturing sector, while one below 50 signifies a contraction.

“Reopening from the Omicron wave continues, facilitating the flow of goods domestically and globally, but we think some of the strength seen in May was a one-off, linked to export backlogs,” Botham wrote in a Pantheon report.

May’s reading represented a significant increase over the manufacturing

PMI
’s
47.4% number in April. At the outbreak’s peak in mid-April, China registered about 30,000 new cases in one day. Recently, less than 200 new daily cases have been reported nationwide, according to data from the PRC’s National Health Commission. Those are the lowest case counts since February, which is the most recent month its manufacturing industry expanded. Manufacturing PMI came in at 50.2% then.

The index is derived from a monthly survey sent to 3,000 manufacturing firms in 31 industries across the country. It is built from 13 sub-indices that capture data in specific categories like new orders, order backlogs, input prices, and employment.

economists, who expect a reading of 50.3%, think an accelerated return to production would be the key driver if growth in the sector is to materialize in this month’s reading.

In a weekly Asia/Pacific preview, they said increases in rebar and cement shipments and an uptick in the issuance of local government special bonds (LGSBs) in May could also indicate greater demand for “upstream production” and a boost to infrastructure.

“The demand outlook remains soft, and is reflected in weak core CPI inflation,” Botham wrote. “More support will be needed for firms, and supply-side stimulus is not going to cut it. Tax and fee cuts may keep firms on their feet, but they do not boost demand or sales.”

In other news, China announced more lenient Covid-19 restrictions for inbound travelers earlier this week, reducing the required quarantine for international arrivals to seven days in a facility followed by three at home. Despite closing down 1.4% Wednesday, the Shanghai Composite Index is still up 5.5% this month.