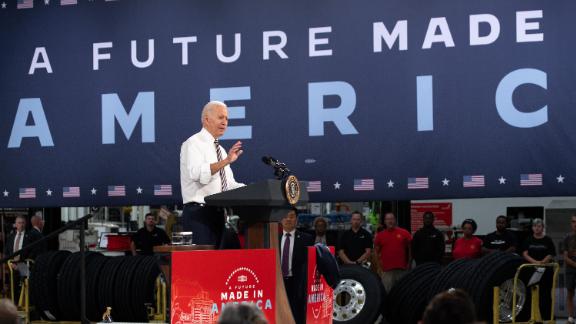 With votes in the Senate to advance his bipartisan compromise last week, President Joe Biden took a big step toward upgrading America’s infrastructure.

And he took a small step toward ensuring Washington can upgrade less of it.

That step backward came with Biden’s move last week to stiffen requirements that federal government purchases be limited to products made in the United States – even if they’re more expensive. Thus he followed the grooves set by both Democratic and Republican predecessors, who have consistently embraced crowd-pleasing “buy American” stances that make economists groan.

“Counter-productive,” cautioned Melissa Kearney, a University of Maryland professor who favors much of Biden’s economic agenda. “It really makes some of the administration’s other goals harder to achieve.”

Biden acted to strengthen the nearly-a-century-old Buy American Act, whose provenance alone hints at shaky economic foundations. It was signed into law by former President Herbert Hoover, who had earlier signed the Smoot-Hawley protective tariffs at the dawn of the Great Depression.

That association has not diminished its political appeal as America’s economy over the decades has become steadily more integrated with the rest of the world. Former President Ronald Reagan signed a companion law as America lost industrial jobs in the 1980s.

Trump signed a series of executive orders advancing the theme. But as with steps taken by earlier presidents, they allowed ample room for such exemptions as complying with international trade agreements and permitting purchase of some foreign-made goods when suitable domestic alternatives were unavailable.

Now Biden – who has placed revival of American manufacturing at the center of his economic agenda – has moved to limit that wiggle room. Proposed rules he announced last week would boost the minimum value of American-made components in products purchased with taxpayer dollars to 60% from 55% immediately, and to 75% over time.

In the name of national security, the administration would enlarge price preferences for some American-made “critical products and components.” It would simultaneously strengthen reporting requirements for federal suppliers to demonstrate the domestic content of their products.

“It’s not lip service,” said William Reinsch, a former Commerce Department official under President Bill Clinton now at the Center for Strategic and International Studies in Washington. “It’s a genuine effort to change the rules.”

By demonstrating America’s reliance on China and other foreign sources for medical supplies, the coronavirus pandemic has fueled the effort. Even economists who celebrate free-market forces acknowledge that Buy America policies make sense in limited circumstances to protect vital national interests.

“It’s a question of scope,” said Kyle Pomerleau of the conservative American Enterprise Institute. He worries that Biden’s policy – which has not yet specified what it considers “critical components and products” – will be too broad.

Heather Boushey, a member of the White House Council of Economic Advisers, defended Buy American by noting “mission critical” objectives it can advance. One example: stocking the federal government’s fleet with domestic-made electric vehicles can accelerate a sector crucial for competing economically and fighting climate change.

“I do not think it’s bad economics,” Boushey said. “Everything in balance.”

“It’s like being for puppies,” cracked Republican counterpart Glen Bolger. In fact, Bolger added, the idea that Washington can boost the domestic economy through federal purchasing power strikes plenty of Americans as too good to be true.

They have some basis for skepticism. In 2018, the Government Accountability Office found that foreign-made products exempt from the Buy American Act made up just 4% of federal government purchases the previous year.

That makes the sphere of economic activity affected by Biden’s initiative fairly small even if it achieves its intended goals.

“You’re talking about $300 billion of goods in a $22 trillion economy,” Reinsch concluded. “The question is whether it’s going to change very much.”

To that extent, the added costs Buy American initiatives impose threaten less economic havoc than protectionism in other forms, such as import tariffs. Jason Furman, who chaired Obama’s Council of Economic Advisers, considers relative harmlessness an argument in their favor.

“The ratio of good politics to bad economics,” Furman said, “might make it fully justified.”