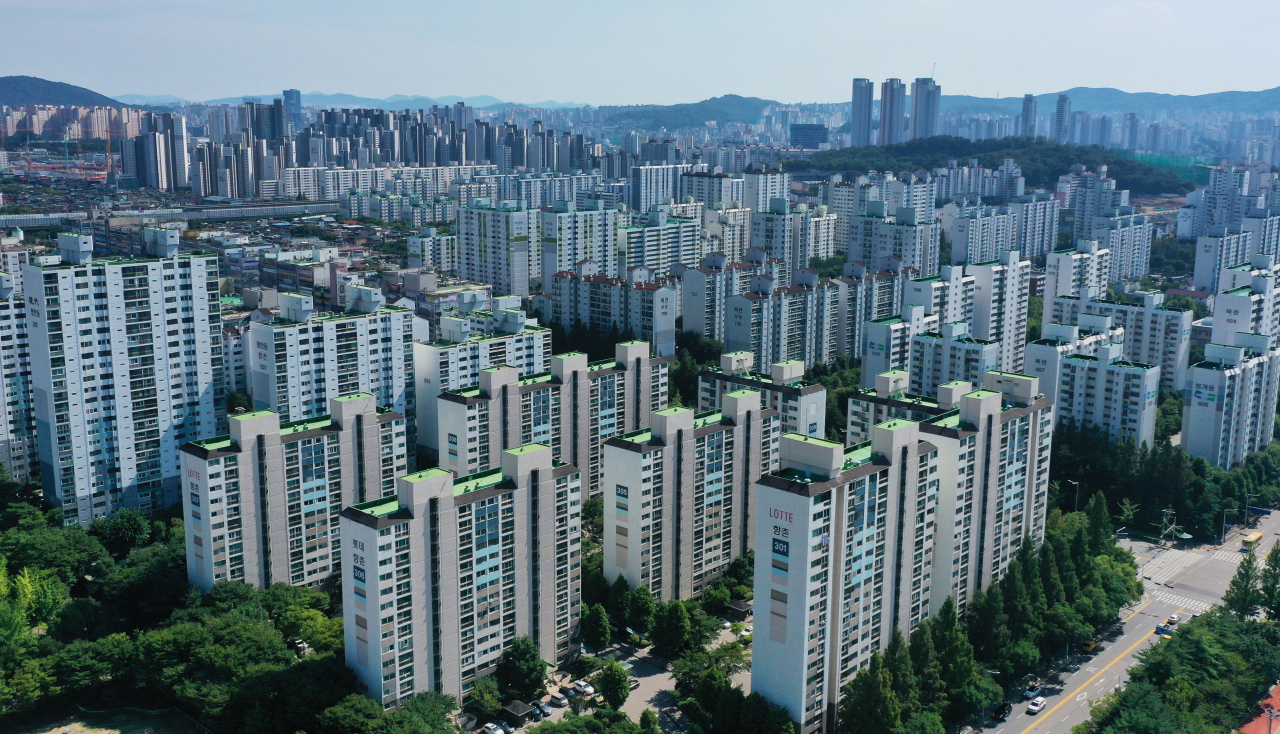 Posted on August 16, 2021 by Tour Maline
Monetary easing policies have been carried out primarily to counter the prolonged COVID-19 pandemic, but brought significant changes in South Koreans’ economic lives, pushing many to jump into markets under inflationary pressure.

For Koreans, living in an era of ample liquidity has been considered a window of opportunity. So much so that it could be considered foolish not to take out loans with ultralow interests to invest in real estate and stocks.

An abundance of cash combined with a housing supply shortage and tightened regulations have driven home prices to surge, widening both the financial and psychological gap between those who own a property and those who don’t. Retail investors with extra cash have been also jumping into stock investments, as well as unconventional options, such as cryptocurrencies, art and even livestock.

But the question is, will this “window of opportunity” remain open?

Panic-buying in the property market, for starters, is expected to go on for the time being, experts say, citing eased loan regulations for first-time buyers that started last month, coupled with a shortage of jeonse apartments.

“The financial authorities had relaxed income conditions for mortgage loans, from the previous 80 million won to 90 million won, in a gesture to help young people and newlyweds to purchase homes,” said Seo Jin-hyung, head of the Korea Real Estate Society, referring to salary limits for preferential borrowing.

“With increased liquidity, demand for home buying will continue to rise, especially amid an unprecedented shortage of jeonse apartment leases after many landlords withdrew their jeonse offers from the property market following the passage of tenant protection laws — which allow tenants to unilaterally prolong their jeonse contract periods by another two years and impose a cap on deposit hikes.”

Without solving the housing shortage, such buying sprees could extend the ongoing housing price rally in the second quarter, Seo added.

Despite a government plan to provide a total of 830,000 additional housing units by 2025 through development projects led by the public sector, Seo believes apartment prices will maintain an upward trend by the end of this year, as the Moon administration has yet to come up with short-term supply measures.

“The current mismatch between supply and demand will further drive up the price of mid- to low-priced complexes in Seoul and surrounding areas,” he said.

Fueled by the abundant liquidity due to COVID-19 stimulus measures, including ultralow interest rates, homebuying sentiment stood at 117.2 as of Aug. 3 on the Korea Real Estate board’s index, sharply up from 90.6 estimated a year earlier. When the index surpasses 100, it means demand for apartments is stronger than the supply in the market. 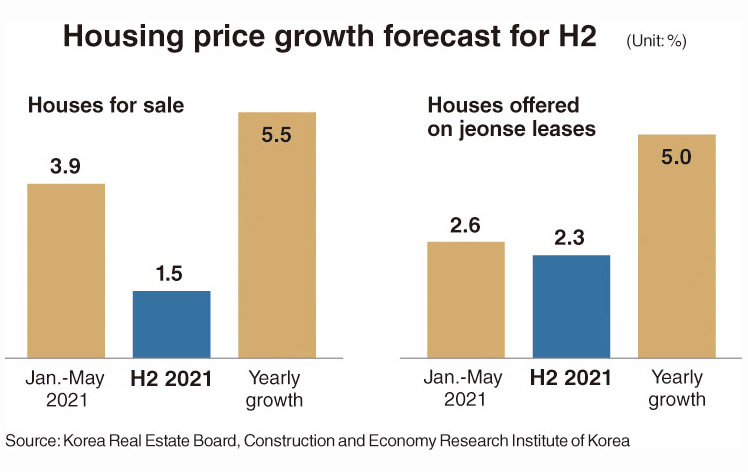 Some experts say the central bank’s drive to raise the country’s benchmark interest rate by the end of the year will have a limited impact on soaring demand for property buying.

Earlier in June, Bank of Korea Gov. Lee Ju-yeol hinted at the first post-pandemic rate hike later this year, saying “If our economy is expected to continue its solid pace of recovery, we will orderly normalize the current easing of monetary policy at an appropriate time.”

Shim Kyo-eon, a professor at the real estate department at Konkuk University, said the rate hike would help tamp down demand for homebuying.

“If the nation’s benchmark interest rate is raised to more than 0.75 percent, it may dampen the loan market, cooling down excessive demand for property purchases,” Shim said. “However, considering the interest hike’s impacts on the macroeconomy, including the exchange rate, employment and consumer prices, there is a low possibility for the central bank to sharply increase its key rate.”

He went on to say that even if the envisioned interest hike cools down the real estate market, apartment prices are bound to surge again unless there is sufficient housing supply.

Unlike the longest rally seen in the previous eight months after the pandemic battered the market last year, the domestic market has been trapped in a box pattern again this month, trading around the 3,200-point level. Experts have also painted a rosy outlook on the domestic stock market in the second half.

Findings from a stock market outlook survey conducted by The Korea Herald with research heads and an equity investment director of two brokerage houses and one asset management firm predicted the country’s benchmark Kospi to move in the 3,050-3,600 points range, while suggesting the tech-heavy Kosdaq to run between 920 points and 1,150 points for the remaining of the year.

NH Investment, meanwhile, suggested an outlook of the main bourse index’s upper-end target of 3,500 points, noting that the index is expected to peak by the end of September. It will then likely face a correction in the fourth quarter, but not below the 3,000-point level.

“Due to next year’s uncertainties such as US tapering worries and concerns over whether domestic business is able to continuously log solid performances in the following year, the main bourse market will enter not a bearish trend but rather a slightly lower trading,” said Oh Tae-dong, head researcher at NH Investment & Securities.

Amid retail investors’ continued stock investment frenzy, Hana Financial picked game and health care sectors as promising industries as they take up a relatively small chunk in terms of market capitalization among structural growth stocks. The tech hardware sector such as semiconductor stocks was its sole choice among cyclical growth stocks.

The brokerage also mentioned that an increase in crude oil prices would boost the shipbuilding sector, while stocks listed in the banking sector is likely to surge on the back of a rise in the US 10-year Treasury note.

“We prefer electric vehicle-related stocks since the industry is forecast to make a structural growth in the next several years amid uncertain macroeconomy environment. The energy sector is likely to be a beneficiary sector related to the reopening,” said Shim Hyo-seop, director of KB Asset Management’s equity investment division.

“But the chemicals sector seems to be a less attractive investment destination since massive supply increase is expected in the second half this year.”

Despite rallies in the stock and real estate markets, the fourth wave of the pandemic has cast a shadow over the economy that had just began to see signs of hope.

Korea’s economy seemed to be on a smooth track to recovery as it wrapped up the first six months of this year, buoyed by a rebound in exports.

The government sharply raised its 2021 growth outlook for the economy to 4.2 percent from its earlier estimate of 3.2 percent, while the central bank forecast a 4 percent growth. But they may have to readjust the numbers under current circumstances.

The fourth wave of the virus, which has been putting daily cases above 1,000 since early July, has set new hurdles for Asia’s fourth-largest economy for the rest of the year.

“It is difficult to say that the recovery trend in exports will continue and the domestic demand is likely to slow,” said Kim Kyung-soo, an economics professor at Sungkyunkwan University.

“South Korea has a high reliance on overseas markets and at the moment, its vaccination rate is lower compared with other key economies — there is a chance that it will be dealt a heavy blow from the prolonged pandemic,” he added.

Experts say that the spike in infections caused by the highly contagious delta variant — which has become the more dominant strain here — would pose more obstacles for the economy.

Businesses in the services sector, which requires frequent face-to-face contact, is likely to come to a screeching halt if the fourth wave of the virus fails to die down, the state-run Korea Development Institute said in a report released Aug. 8.

“The intensifying spread of COVID-19 may partially limit the recovery of domestic demand, mainly in the face-to-face service industry,” it said in the report.

The services sector has been struggling under Level 4 distancing rules, the toughest in the government’s four-tier scheme, adopted in the greater Seoul area.

With concerns of the real economy growing, the Bank of Korea is trapped in a dilemma of choosing the appropriate time to raise its benchmark interest rate from the current record low of 0.5 percent.

Investment banks and experts, including JP Morgan, project the BOK to raise its key rate as early as the next rate-setting meeting scheduled for Aug. 26.

While the expected 25 basis-point hike is projected to alleviate inflationary pressure and put a brake on the nation’s snowballing household debt, it is likely to make debt repayment more difficult for borrowers.

A recent BOK document obtained and analyzed by an opposition lawmaker here, showed that a rate hike would lead to a higher-rate trend among commercial banks, and the interest rate that local borrowers would have to repay would gain an overall 11.8 trillion won if the loan rate gains 1 percent.

In a separate report, Yang Kyung-sook of the ruling Democratic Party said “the current borrowing spree due the ultralow interest rate trend could lead to pressure in debt interest rate repayments for individuals and pose as a credit risk.”

“The heaviest blow will hit those in their 20s and 30s, who are just starting their careers, and those in their 60s, who have just retired and do not have sufficient ability to repay their increased debts,” she added.

The BOK’s decision to slash its base rate to a record low of 0.5 percent last year has spurred retail investors to borrow more money and make further investments in the nation’s stock and real estate markets.

According to the Financial Services Commission Tuesday, the nation’s outstanding household debt rose 2.1 percent or 34.5 trillion won on-quarter to 1,666 trillion won as of end-March.

Finance Minister Hong Nam-ki said Wednesday that the goal of a 4.2 percent growth for this year will depend on the economic development and the pandemic situation in the third quarter of this year.

“The spread of the variant viruses, quarantine, economic sentiments, situation surrounding the real economy and financial measures would be key factors to monitor in the third quarter, which could act as either a positive or negative turning point,” the nation’s top economic policymaker said.

Exports, which account for half of the economy, rose 29.6 percent on-year to a record high of $55.4 billion in July. It marked the ninth straight month of gains.

On Aug. 15, 2021, The Korea Herald celebrates its 68th anniversary as South Korea’s No. 1 English-language daily. To mark the day in a time of pandemic and turmoil, The Korea Herald has prepared a series of stories on the challenges that we face and the prognosis for life with, or after COVID-19. — Ed.