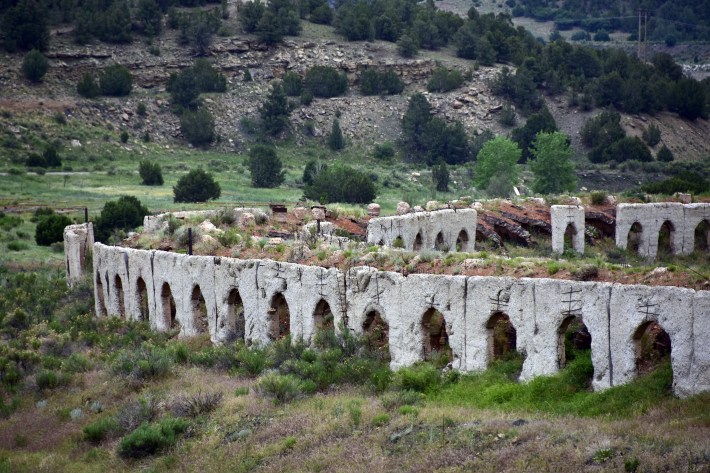 The first new coal mine in Colorado in almost a decade fired up operations this month, marking a rare upturn in the steadily declining coal industry.

There were about 1,700 coal mines in Colorado a century ago. Today there are seven, and all but one is preparing for a world without coal-powered electrical plants. Southern Colorado’s New Elk Mine, which opened in 1951 and ended coal production in 1994, started mining again with plans to ship as much as 2.5 million tons of coal a year to overseas steel-making plants.

“Our strategy is to provide metallurgical coal to the seaborne market, not the U.S. steel market,” said Mark Gray, the chairman of Australia’s Allegiance Coal Limited, who expects to employ more than 80 miners at New Elk by the end of this year.

Like most rural Colorado communities, Trinidad has been moving from a singular reliance on historical industries like energy production, mining and agriculture. But they are welcoming New Elk in the drive toward a diverse economy.

“To be completely honest, the mine is an amazing gift and we are super glad they are coming out there, but our focus has been on tourism, our creative industries and historic preservation,” said Wally Wallace, Trinidad’s economic development director.

Trinidad was created as a coal mining town. Now it has the new Fishers Peak State Park, a growing movement to preserve its historic downtown, a vibrant yet ebbing marijuana industry and a thriving population of artists. This fall Trinidad will host an international field of runners and cyclists in the inaugural Rad Dirt Fest gravel race. It’s also hosting the first Colexico Experience Spaghetti & Westerns Festival, featuring Western movies and Italian dinners for Amtrak travelers riding rails between Trinidad and Raton, New Mexico.

The irony that Trinidad’s championing of historic preservation now includes the revitalization of its most historic vocation, coal mining, is not lost on eco-devo boss Wallace.

“It’s not been our focus to bring back extractive industry, but we want to support them,” Wallace said. “But at the same time, there is a history of them coming in and employing a lot of people and then when the industry changes, we find a lot of people out of work. We want to make sure we are not over-focusing on one industry to avoid that boom-bust cycle.”

Gray points out that the market for metallurgical-grade coal for steel-making blast furnaces is strong, especially in overseas markets. His company is bullish on “long-term demand for this multigenerational asset,” he said.

“This is one of the largest, if not the largest, single continuous metallurgical coal deposits in the U.S.,” Gray said.

The New Elk mine near Trinidad originally opened 70 years ago to provide coking coal for conglomerate Colorado Fuel & Iron’s steel works in Pueblo. When the steel mill began replacing coal-fired furnaces and coke ovens with electric systems in the 70s and 80s, the New Elk Mine began slowing its production. In the late 1980s and early 1990s, Trinidad withered as the mine faded.

Cline Mining Co. sold the New Elk Mine to Allegiance last year. Cline in April 2019 planned to mine about 73 million tons of coal — including federally owned minerals — from the mine over 30 years. Allegiance said the New Elk Mine will eventually ramp up to produce 2.5 million tons a year of coal over the next 25 years. The mine is permitted through the Colorado Division of Reclamation, Mining and Safety with a surety bond of $4.6 million held by the state.

In 2019, Cline sought BLM approval to mine an additional 8 million tons of federally-owned coal, which would extend the life of the mine by an additional five years. The request for a BLM lease would enable the mine owner to better access private and state-owned coal reserves. The Bureau of Land Management began an Environmental Analysis of that plan, hosting public meetings and drafting a 110-page review. The BLM’s first-draft analysis favored the plan.

As Cline began negotiating the sale of the mine to Allegiance in 2019, the company suspended the environmental review process.

Allegiance has not been in touch with the BLM about restarting that lease application or the environmental study.

“Essentially what those parcels were going to do was make it easier for them to access minerals they already had access to,” said Brant Porter with the BLM’s Royal Gorge Field Office. “This one is a little bit of a different animal in terms of coal leases.”

Gray said his company does not need federal leases to access the coal. “It’s something we will contemplate as we advance, but we don’t need it,” he said.

The last new coal mine permit issued in Colorado was for the New Horizon North Mine in Nucla in 2012. That mine, in Montrose County’s West End, fed Tri-State Generation and Transmission Association’s Nucla Station power plant and is now closed.

The seven remaining coal-fired electrical power generation plants in Colorado are slated for closure between 2023 and 2030, leaving uncertain the status of six coal mines that have long served power plants.

Opposition to coal mines is fierce in Colorado. Most mine operators face vehement opposition when they plan expansions or work on land leased from the federal government. Conservation and environmental groups have not been as vocal about New Elk, which is not accessing federal land or minerals. Metallurgical coal, or coking coal, burns hotter and cleaner than thermal coal, which is burned to make steam for turbines that generate electricity. Still, extracting and using coking coal to make steel is hardly earth-friendly.

Private coal development offers limited options for public review and input “and the same goes for ways to halt it or prevent it,” said Allison Melton, an attorney with the Center for Biological Diversity.

“Any new coal extraction, whether it’s public or private, is a grave mistake,” Melton said. “It will worsen the climate emergency and the wildlife extinction crisis and lessen our chances of leaving a livable planet to our children and grandchildren.”

Trinidad, like most every other community in Colorado, is grappling with a housing shortage. Gray said he hopes the city and Las Animas County can help entice developers to the region. (Unlike any town in Colorado, Trinidad has an abandoned, unbuilt community on its border where now-bankrupt developers planned 1,700 homes on a property larger than the town itself. The Cougar Canyon golf resort community, with most of its water, sewer and power infrastructure already in place, has been deserted since 2009, its half-built, 117-room hotel and weed-choked Nicklaus-designed golf courses falling slowly to ruin.)

“We really want to do something special with that, especially as we discuss this growing need for housing,” said Wallace, noting the decades-long tangle of developers, investors, lawsuits and back taxes haunting the property.

The city is assembling a Request for Proposals that hopefully will entice developers to finish Cougar Canyon, Wallace said.

Gray said his workers, as many as 80 by the end of the year, will earn “good salaries,” so he’s hoping those developers can build single-family homes. Right now, he’s encouraging his new hires to look for homes as far away as Pueblo and Santa Fe. He is offering workers overnight accommodations between weekday shifts.

Gray, however, has a more critical issue than housing.

He’s had to dismiss “fantastically qualified applicants” because they are testing positive for marijuana.

“This is a very real issue for us,” said Gray, who fears how federal overseers at the Occupational Safety and Health Administration would react to an accident involving a worker who was hired after testing positive for marijuana. “A very significant number of people who are applying for jobs here are unable to pass a drug test.”

Gray said he has reached out to Colorado officials about guidance for drug testing and hiring.

“I’m getting nothing from the state. Zero,” he said. “Do you know? How am I supposed to deal with workers who have positive drug tests?”

The Colorado Sun has no paywall, meaning readers do not have to pay to access stories. We believe vital information needs to be seen by the people impacted, whether it’s a public health crisis, investigative reporting or keeping lawmakers accountable.

This reporting depends on support from readers like you. For just $5/month, you can invest in an informed community.