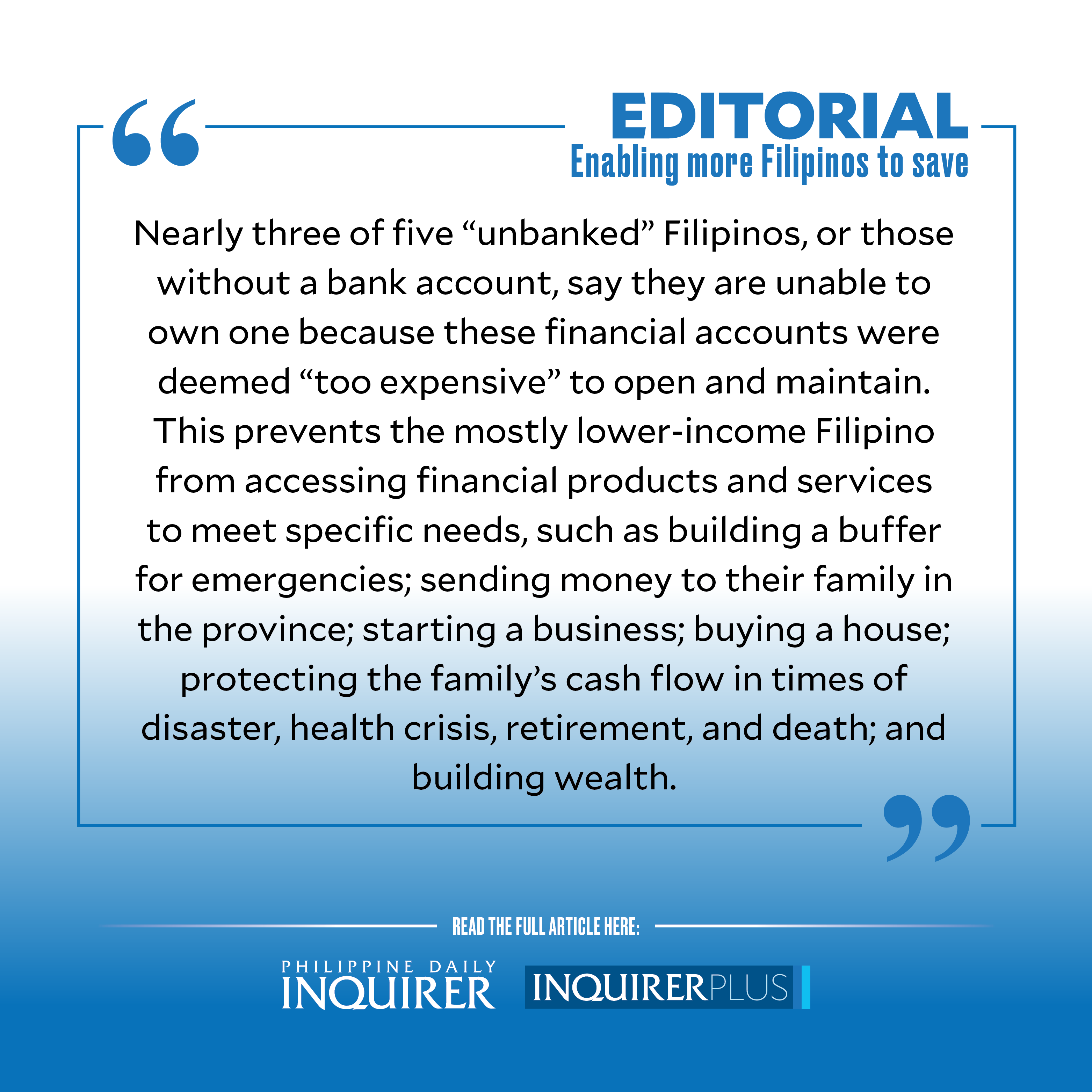 Enabling more Filipinos to save

First, the good news: According to the World Bank, a little more than half or 51 percent of Filipino adults now have financial accounts, a jump from just 34 percent in 2017 and driven mainly by the widespread adoption of digital payments amid the lingering COVID-19 pandemic.

“The digital revolution has catalyzed increases in the access and use of financial services across the world, transforming ways in which people make and receive payments, borrow, and save,” World Bank Group president David Malpass said in a statement on Wednesday.

Now for the bad news: Despite the surge in the use of digital payments and the increase in total account ownership, significant gaps remain.

The same Global Findex 2021 report and database revealed that nearly three of five “unbanked” Filipinos, or those without a bank account, say they cannot own one because these financial accounts were deemed “too expensive” to open and maintain.

This prevents the mostly lower-income Filipinos from accessing financial products and services to meet specific needs, such as building a buffer for emergencies; sending money to their family in the province; starting a business; buying a house; protecting the family’s cash flow in times of disaster, health crisis, retirement, and death; and building wealth.

“In the Philippines, 30 percent of adults (55 percent of savers) saved in some other way, making it one of the economies with the highest share of adults doing so,” the World Bank said, referring mainly to the practice of Filipinos keeping cash at home or spending them on assets such as livestock or property.

The extensive World Bank report also noted that only 34 percent of poorer Filipino adults have an account. In addition, Filipino women were also found to be 8 percentage points less likely than men to have accounts that will allow them to have more control over their finances.

These findings jibe with the numbers in the 2019 Financial Inclusion Survey of the Bangko Sentral ng Pilipinas (BSP), which showed that there is indeed a “significant gap” in account penetration.

The survey showed that ownership in the upper economic class is almost twice as higher as in the lowest economic class, with employed individuals also twice as likely to have an account as those unemployed.

The BSP also noted with concern that financial exclusion “disproportionately affects millions of Filipinos in the lower-income classes and those who are unemployed, less educated, and belonging to the younger generation.”

“Other underserved and unserved segments include senior citizens, migrant workers and their families, persons with disabilities, indigenous peoples, forcibly displaced persons, those who are excluded due to their religious beliefs, and other marginalized segments. Financial exclusion is also prevalent in the agriculture, MSME (micro, small, and medium enterprises), and startup sectors as well as among informal workers,” the BSP said in its separate National Strategy for Financial Inclusion 2022-2028, which focuses on advancing inclusive digital finance and the financing access of MSMEs. The grim figures have, fortunately, only strengthened the BSP’s resolve to push more aggressively for financial inclusion, which it defined as “a state in which everyone, especially the vulnerable sectors, has effective access to a wide range of financial services.”

BSP Gov. Felipe Medalla has much to build on as BSP data showed that the number and value of basic deposit accounts (BDAs) rose significantly in 2021, with total deposits jumping by 7.6 percent to P5.1 billion at the end of last year from P4.7 billion at end-2020.

The BDA, introduced in 2018, refers to a bank account with an opening balance requirement of P100 or less, no maintaining balance, no dormancy charges, and simple identification requirements. These accounts that can hold a maximum of P50,000 each were developed precisely to encourage more Filipinos, especially those in the low-income sector, to use the banking system.

The BSP said banks offering BDAs—138 or 28 percent of all supervised banks—are allowed to customize this product by using technological innovations to attract and service clients.

As of the end of the fourth quarter of 2021, the number of BDAs surged by 19 percent to 7.9 million from 6.6 million in the same quarter of 2020. More promise will be added to the list as the BSP continues to promote them by enabling policy issuances such as regulatory measures to encourage banks to offer these accounts.

But while the BSP, with the cooperation of the entire banking and financial system, has made great strides toward its goal of financial inclusion, the runway to the finish line remains long and unfortunately affects the already burdened poor much more than the rich.

This should give all the players greater incentive to work together to address the gaps that prevent more Filipinos from enjoying the benefits of financial inclusion, which goes far beyond merely having a bank account into enabling the vulnerable and the marginalized to better save, invest, and transfer their hard-earned money.

Don’t miss out on the latest news and information.

Enabling more Filipinos to save