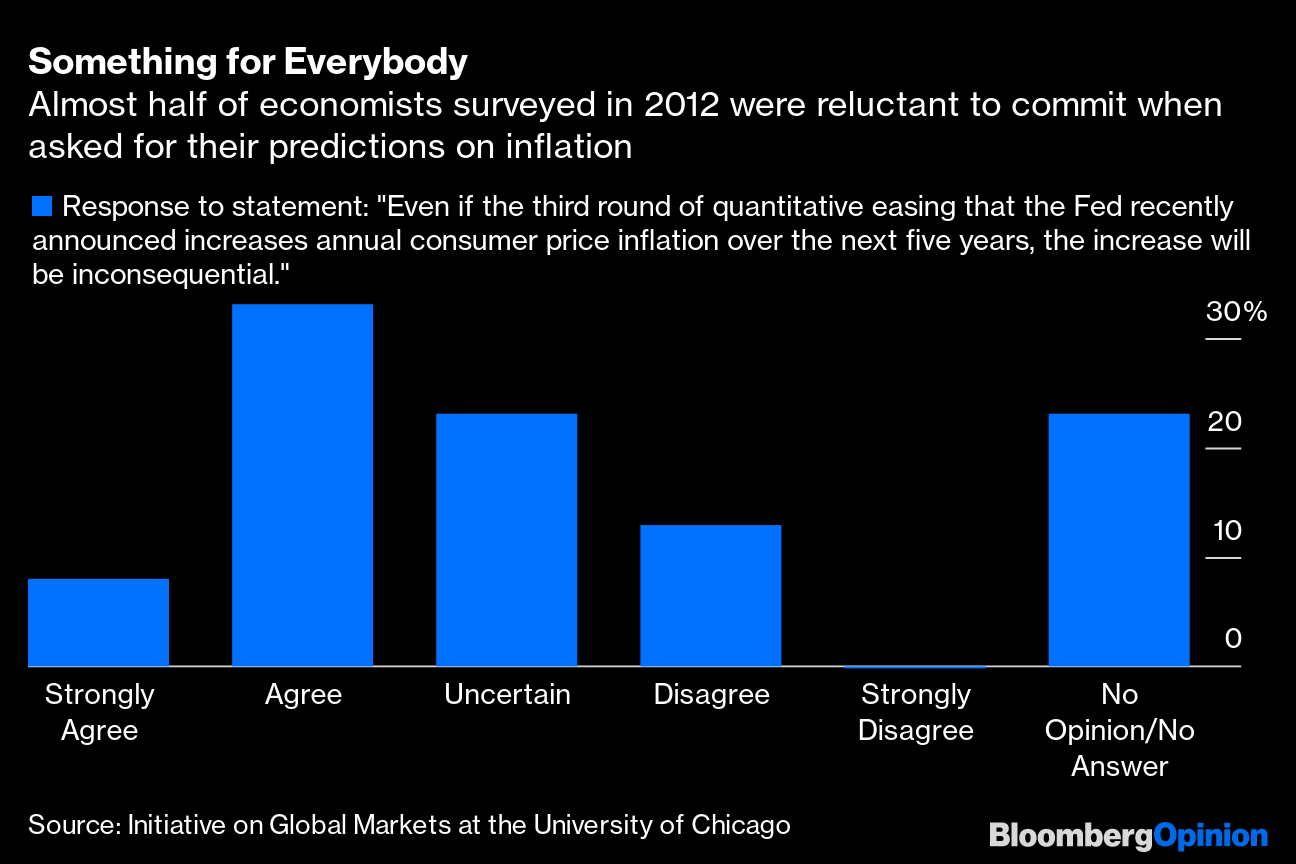 Economic Forecasting Won’t Tell Us Much About the Future

One of the biggest questions hanging over the U.S. economy right now is whether the government is spending too much money. Some prominent economists are warning it’s time to pump the brakes.

President Joe Biden’s $1.9 trillion pandemic relief package came on top of $3.1 trillion in similar outlays back in 2020; and now the president is planning at least two new big spending initiatives for infrastructure and job creation. Some economists worry it’s too much and that higher taxes won’t be able to cover all the new spending.  If that’s the case, and the Federal Reserve chooses to keep interest rates low, the result could be accelerating inflation.

But before you get too alarmed, remember that macroeconomics is a hard subject, and even the experts know only a little bit about how the economy works. So while we should definitely pay attention to economists’ intuition regarding things like government spending, inflation and unemployment, we should also keep in mind that their pronouncements are far from the final word.

Take, for example, a recent series of tweets from former Council of Economic Advisers Chair Jason Furman in which he declared that most of the economists he talks to think Biden’s relief package was too large, never mind the future bills that will come due:

To give the full context, it is my sense based on talking to academic macroeconomists that are not part of the DC debate that about 90%+ think the American Rescue Plan was too large and 70%+ think the Fed is currently too dovish.

Of course, this might not be the consensus of all economists; it might simply represent the thinking of  the select set of economists inside Furman’s bubble. But suppose it really is the consensus among academics. Should we be worried?

Let’s talk about that. First, it’s important to realize that unlike engineers, or even meteorologists, economists don’t really have theories that can predict things like inflation or unemployment with any sort of reliability. The most complex academic forecasting models can only give a vague picture of what the economy will look like beyond a three-month horizon, and even then they tend to underperform much simpler models that an undergrad student could make and run in a few minutes. So while it’s theoretically possible that these models that can’t forecast the future will nevertheless be able to predict the effects of government policy, it’s highly unlikely.

So economists don’t have a crystal ball. What they do have is the knowledge accumulated from spending a lot of time looking at economic statistics, studying history and reading the news. So whatever machine-learning algorithm exists inside their head to generate their intuition has both far more experience and far more data than the average person’s, allowing them to have much better insights.

There’s some evidence that this is true for economists at the Federal Reserve, at least. A number of studies suggest that the Fed’s Greenbook forecasts outperform other forecasting methods, as well as private-sector economists, when it comes to predicting inflation. This could be due to Fed economists’ superior intuition, or — more likely — it could be that they have access to better data than anyone else. If it’s the latter, it means academics, who lack access to the Fed’s data, wouldn’t have an edge.

We can also look at the U.S. Economic Experts Panel, run by the Initiative on Global Markets at the University of Chicago’s Booth School of Business. This is a regular survey of top academic economists on various policy questions. Looking back at 2012, for example, we can see that economists generally didn’t worry too much that the Fed’s third round of quantitative easing would produce significant inflation:

But notice how uncertain the economists were! Even though two previous rounds of QE had conspicuously failed to spark inflation, fewer than half of the economists surveyed were willing to go on record saying results in 2021 would be the same! So economists’ intuition doesn’t get full marks here.

Minimum wage is one of the most basic, classic economic policy questions; if economists’ views on it bounce around like this, it means that their policy intuition isn’t firmly anchored.

So while it’s good to get input from economists on questions like whether Biden is spending too much, it’s important not to take it as gospel. Macroeconomics is such an inherently complex subject that even the top experts are often the blind leading the blind. If Furman is right about academics’ consensus, it would mean Biden should be a little bit more cautious about deficit spending — but only a little.

This column does not necessarily reflect the opinion of the editorial board or Bloomberg LP and its owners.

To contact the author of this story:
Noah Smith at [email protected]

To contact the editor responsible for this story:
Susan Warren at [email protected]