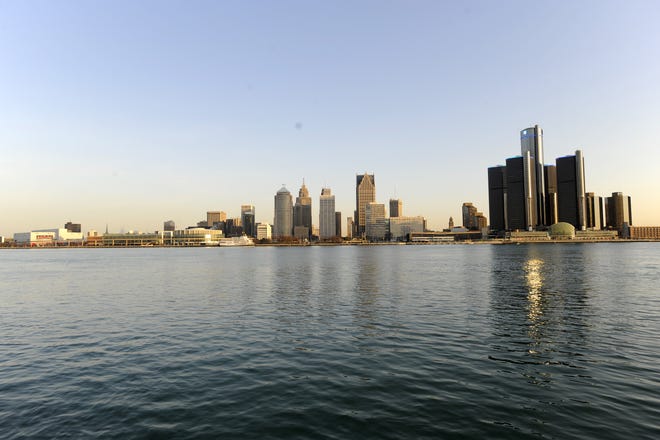 Fewer Detroiters are jobless following last year’s pandemic-induced downturn, but low wages remain an obstacle for workers, according to a University of Michigan forecast released Monday.

Unemployment in the city is returning to pre-pandemic levels and it’s expected to decrease even further in the coming years as a bundle of blue-collar jobs come online.

But wages remain a challenge. Fewer than 30% of Detroit residents who worked full time earned enough to support a family of three at a middle-class standard of living in 2019, based on the latest data available to forecasters.

There is a chasm between the average wage for jobs based in Detroit and the average salary of a Detroit resident: $73,000 and $36,100, respectively. Both figures will grow in the coming years, forecasters predicted, but they predict that disparity will remain.

Commuting is a big reason for the difference between average pay for Detroit-based jobs and average earnings for Detroit residents, said Gabriel Ehrlich, UM economic forecaster. People who work high-paying downtown jobs often commute from the suburbs, while city residents sometimes commute to the suburbs to work lower-paying jobs.

“Despite the wage growth we are forecasting, we expect that Detroit’s fundamental ‘income problem’ of too many residents earning too little money will persist,” economists said in the report.

Many Detroiters put in 60 to 70 hours per week at multiple jobs and still struggle to make ends meet, said Chantel Watkins, lead organizer for Michigan’s One Fair Wage, an advocacy group promoting higher wages for service industry employees. The wages for hourly positions in the service, hospitality and retail industries often don’t keep up with the rising costs of rent, food, clothes and other household expenses, she said.

“A lot of those people do not receive higher wages based on their cost of living,” she said. “You’re very lucky if you work in an industry [where] the wages do keep up with it.”

Watkins knows that firsthand from her experience working as a concierge in a spa. She received a $1.15 increase in her hourly wage over a two-year period, while her monthly rent increased from $750 to $900. It’s even harder for service industry employees who rely on tips and earn a minimum hourly wage of $3.67, she said.

Those industries are likely to be the slowest to rebound from the pandemic downturn, Ehrlich predicted.

“What is remote work going to mean for some of those jobs downtown?” he said. “If people are working from home two days a week, even that reduces the demand for business lunches, dry cleaning, potentially dinners after work.”

Unemployment declined ‘more quickly than we dared to hope’

Although it highlighted challenges for service industry workers, forecasters’ Monday report had plenty of optimism for the city’s economy overall.

Detroit’s unemployment rate “has declined more quickly than we had dared to hope last year,” UM forecasters said. The unemployment rate hit 38% in May 2020, averaged 22% last year and dropped to a 10% average in the first six months of 2021. In June, it was 8.5%.

The Monday forecast is part of a series the city commissioned from UM. University economists used information from the U.S. Department of Labor, American Community Survey and Michigan Bureau of Labor Market Initiatives and Strategic Initiatives to forecast the city’s economy through 2026.

The review only counts jobs for which someone earns a paycheck, so the forecast does not include “gig” workers, self-employed workers or work performed under the table.

University economists predict Detroit’s economy will rebound faster than the state’s thanks to “several large projects” including the Stellantis’ Mack Avenue plant expansion, the Gordie Howe International Bridge project and the new Amazon distribution center expected to come online before 2026.

Roughly 3,000 Detroiters have been hired to work at the Mack Avenue and other nearby Stellantis facilities, said Nicole Sherard-Freeman, Mayor Mike Duggan’s group executive for jobs, the economy and Detroit at Work in a Monday press release from Duggan’s office.

“The mayor has a clear strategy, which is to attract major employers that will put Detroiters to work and this study reflects some of our initial success in those efforts,” Sherard-Freeman said of Duggan, who is seeking a third term as mayor in November.

“This report clearly shows that Detroit is on the right path with the strategies we are implementing,” he said.