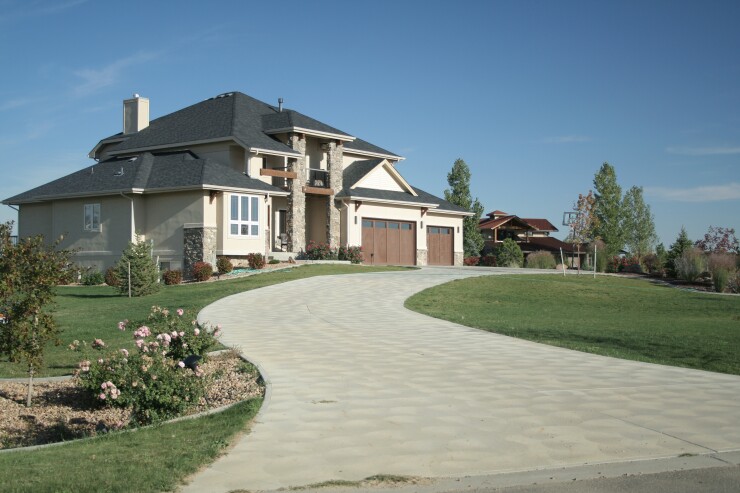 The larger-than-normal increase in the conforming loan limits for 2022 took a toll on the jumbo market in the first quarter of the year, especially in January’s production, a report from dv01 found.

For January, approximately $5 billion in jumbo mortgage loan production was lost because of higher conforming limits. In a typical January, only $1.5 billion is lost, said Vadim Verkhogylad, dv01’s vice president and head of research publication, who wrote the report.

Jumbo lenders originated $36 billion in January, down from $61 billion in December, a 41% decline. But over the past five years, production fell an average of 23% annually because of higher conforming loan limits, dv01 said.

While this February’s jumbo volume was down by 1.5% compared with January, originations grew month-to-month in March by 26%.

“March figures may seem puzzling even after accounting for a 60-day lag for rate locks, which are longer than traditional agencies due to lack of Day 1 Certainty [a Fannie Mae underwriting program that speeds the process] in jumbo loans,” Verkhogylad wrote. “Rates had already risen substantially (rates in February 2022 had already risen 60 basis points over the prior four months), and the continued strong originations are a reflection of both continued strong purchase activity, coupled with borrowers that had any remaining rate incentives refinancing now in anticipation of even further rate hikes.”

The highest end of the market, loans with balances over $3 million, had a massive decline in volume, activity between $2 billion and $3 billion was flat.

“The decline began in 2019, but was surprisingly accelerated post-COVID; dv01 had expected higher-balance originations to grow as a result of home price appreciation and record-low rates because these higher-balance loans have the biggest dollar incentive to refinance,” Verkhogylad said.

The simple explanation could be that higher priced homes were bought using all cash. At the same time, existing owners had less inclination to sell given the shifting COVID landscape.

The most aggressive growth was seen in loans with balances between $1 million and $1.5 million, followed by those in the next category up, between $1.5 million and $2 million, a consequence of home price acceleration driving more borrowers into those ranges.

Not surprisingly, banks dominate the market, with Wells Fargo consistently the No. 1 originator over the past five quarters. Bank of America was No. 2 for the first quarter of this year, while JPMorgan Chase was No. 3; for the same period in 2020, this was reversed. Banks originate jumbo loans and keep them on their books in order to sell these typically high net worth borrowers on other products.

U.S. Bank was fourth, followed by Rocket, the only nonbank in the first quarter’s top 10 lenders.

In the fourth quarter of 2021, nonbanks played a more prominent role in the top 10 with Rocket at No. 4, United Wholesale Mortgage at No. 5, Guaranteed Rate seventh and loanDepot eighth.

But there’s a highly plausible explanation for that. During the fourth quarter, several nonbank mortgage lenders, including United Wholesale Mortgage, Homepoint, PennyMac, Rocket and Finance of America, originated loans at the 2022 Fannie Mae and Freddie Mac limits, holding them on their balance sheet until the new year when they could be sold to the government-sponsored enterprises. At the time that these loans were originated, however, they qualified as jumbo mortgages.

For this jumbo sales report, dv01 used county recorder information sourced from Attom Data Solutions. The securitization market, which would have more detailed loan information, only makes up 10% of all jumbo mortgage originations, dv01 noted.

Furthermore, 2020 county disclosures may not be reliable because of COVID-19’s impact on the ability to record mortgage information. As a result, mortgage activity for that year is likely understated, said Verkhogylad.