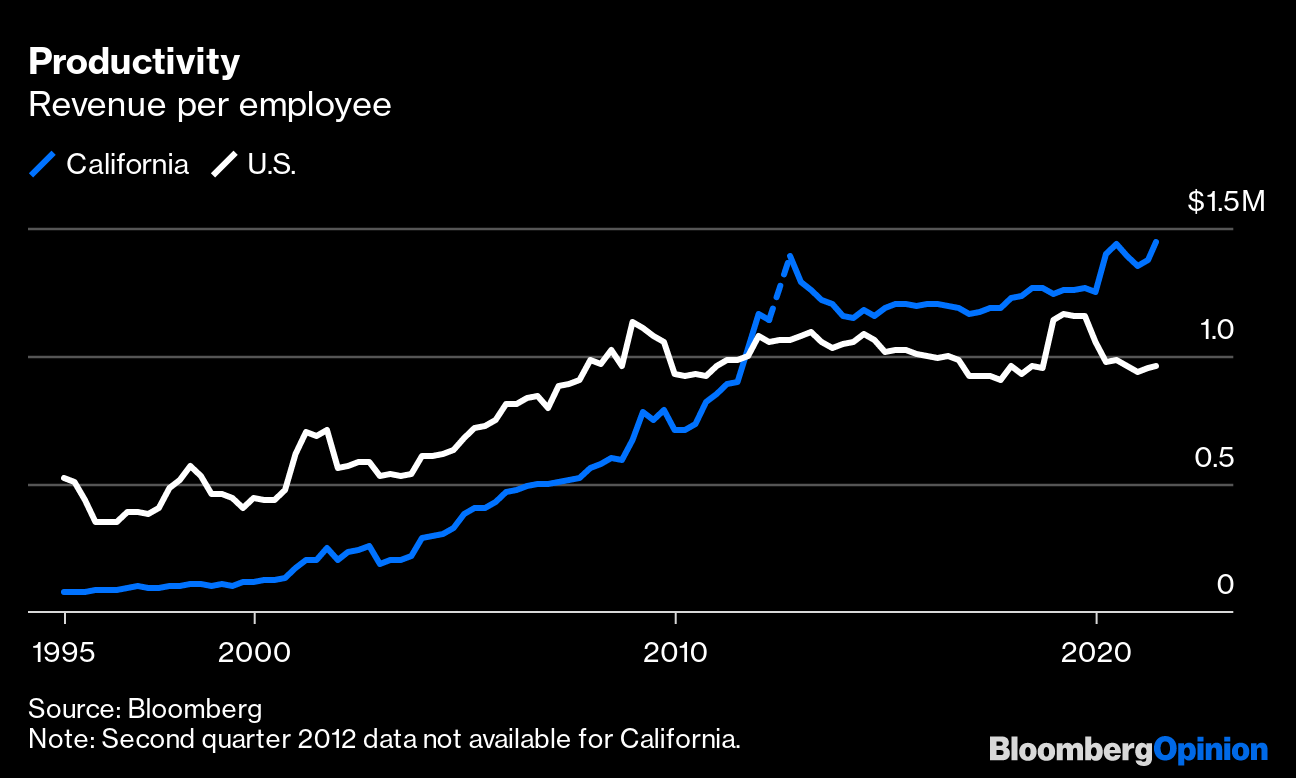 When misfortunes multiplied during the coronavirus pandemic, observers seized on a four-letter word signaling end of days for the largest state with one-eighth the U.S. population and 14% of its gross domestic product. “California doom: Staggering $54 billion deficit looms,” the Associated Press concluded a year ago in May. “California Is Doomed,” declared Business Insider two months earlier. ”Is California doomed to keep burning?” queried the New Republic in October. California is “Doomed” because of rising sea levels, according to an April EcoNews Report. Bulletins of people leaving the world’s fifth-biggest economy for lower-cost states because of high taxes and too much regulation stifling business continue unabated.

No one anticipated the latest data readout showing the Golden State has no peers among developed economies for expanding GDP, creating jobs, raising household income, manufacturing growth, investment in innovation, producing clean energy and unprecedented wealth through its stocks and bonds. All of which underlines Governor Gavin Newsom’s announcement last month of the biggest state tax rebate in American history.

By adding 1.3 million people to its non-farm payrolls since April last year — equal to the entire workforce of Nevada — California easily surpassed also-rans Texas and New York. At the same time, California household income increased $164 billion, almost as much as Texas, Florida and Pennsylvania combined, according to data compiled by Bloomberg. No wonder California’s operating budget surplus, fueled by its surging economy and capital gains taxes, swelled to a record $75 billion.

If anything, Covid-19 accelerated California’s record productivity. Quarterly revenue per employee of  the publicly-traded companies based in the state climbed to an all-time high of $1.5 million in May, 63% greater than its similar milestone a decade ago, according to data compiled by Bloomberg. The rest of the U.S. was nothing special, with productivity among those members of the Russell 3000 Index, which is made up of both large and small companies, little changed during the past 10 years.

While pundits have long insisted California policies are bad for business, reality belies them. In a sign of investor demand, the weight of California companies in the benchmark S&P 500 Index increased 3 percentage points since a year ago, the most among all states, according to data compiled by Bloomberg. Faith in California credit was similarly superlative, with the weight of corporate bonds sold by companies based in the state rising the most among all states, to 12.5 percentage points from 11.7 percentage points, according to the Bloomberg Barclays U.S. Corporate Bond Index. Translation: Investors had the greatest confidence in California companies during the pandemic.

The most trusted measure of economic strength says California is the world-beater among democracies. The state’s gross domestic product increased 21% during the past five years, dwarfing No. 2 New York (14%) and No. 3 Texas (12%), according to data compiled by Bloomberg. The gains added $530 billion to the Golden State, 30% more than the increase for New York and Texas combined and equivalent to the entire economy of Sweden. Among the five largest economies, California outperforms the U.S., Japan and Germany with a growth rate exceeded only by China.

Enlarging its No. 1 footprint with factory jobs, California GDP from manufacturing gained 13% over the past five years to $316 billion in 2020, an increase unmatched by any of the 10 largest manufacturing states: Texas was No. 2 with 9% growth, followed by Indiana at 8%, according to data compiled by Bloomberg. For all its bluster as being “best for business,” Texas can’t match California’s innovation. California prosperity is rooted in its appeal as a worldwide destination for technology and health-care development. Of the 6,924 corporate locations in the state, 18% are research and development facilities, a ratio that easily beats the U.S. overall (11%), China (15%), U.K. (14%) and Japan (10%). Only Germany, at 19%, has a higher rate, according to data compiled by Bloomberg. The percentage of Texas facilities for R&D is less than half California’s at 8.2%.

Corporate California also is the undisputed leader in renewable energy, with 26 companies worth $897 billion, or 36% of the U.S. industry, having reported 10% or more of their revenues derived from clean technology. No state comes close to matching the 21% of electricity derived from solar energy. Shares of these firms appreciated 282% during the past 12 months and 1,003%, 1,140% and 9,330% over two, five and 10 years, respectively, with no comparable rivals anywhere in the world, according to BloombergNEF. The same companies also increased their workforce 35% since 2019, almost tripling the rate for the rest U.S. overall and four times the global rate.

Perennial water shortages and devastating fires drive the perception of dystopia. But California reigns supreme with the  GDP-equivalent of $40.2 billion derived from agriculture, forest and hunting in 2020. That’s greater than the output from the next five largest states — Iowa, Washington, Illinois, Texas and Nebraska — combined, according to data compiled by Bloomberg.

Even with the economic disruptions caused by the pandemic, California cemented its position as the No. 1 state for global trade, with its Los Angeles and Long Beach ports seeing growth that led all U.S. rivals for the first time in nine years in 2020. Much has been made of the state reporting its first yearly loss in population, or 182,000 last year. Had it not been for the Trump administration preventing new visas, depriving as many as 150,000 people from moving to California from other countries annually, the 2020 outcome would have been more favorable.

Even so,  Republicans, opposed to Newsom’s policies favoring immigration, criminal justice reform and greater benefits for housing, health and child care, want voters to decide whether he should be replaced in a potential recall election later this year. Former San Diego Mayor Kevin Faulconer, a Republican who is among those running to succeed him, said Newsom, a Democrat, hurt the state’s small businesses.

That’s not what the data shows. The 373 California-based companies in the Russell 2000 Index, which includes small-cap companies across the U.S., appreciated 39% the past two years and 85% since 2016, beating the benchmark’s 34% and 67%, respectively. The same California companies reported revenue growth of 56% the past five years, dwarfing the benchmark’s 34%, according to data compiled by Bloomberg. More important, California companies invested 16% of their revenues in R&D, or their future, when the rest of the U.S. put aside just 1%.

Investing in the future is California’s way, the opposite of doom.

— With assistance by Shin Pei, and Tom Lagerman

This column does not necessarily reflect the opinion of the editorial board or Bloomberg LP and its owners.

To contact the author of this story:
Matthew A. Winkler at [email protected]

To contact the editor responsible for this story:
Robert Burgess at [email protected]