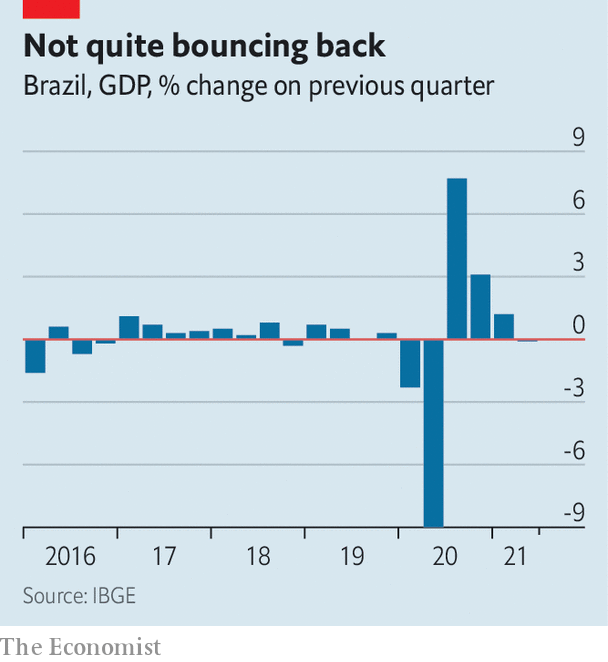 Brazil is running out of time for economic reforms

A MEME THAT circulated recently on Twitter in Brazil depicted the economy minister, Paulo Guedes, as a footballer facing a wide-open goal. He shoots. The ball soars over the crossbar. The meme refers to a proposed tax reform that Mr Guedes has been trying to get through Congress but it also reflects growing pessimism about the government’s entire economic agenda. After a pensions revamp in 2019, the year Brazil’s populist president, Jair Bolsonaro, took office, most reforms stalled amid political turmoil and covid-19. Latin America’s biggest economy is weakening, squeezing the government’s budget. Markets are getting queasy. With next year’s presidential elections drawing near, time for reforms is running out.

Brazilian investors were remarkably forgiving in 2020, when the government threw money at the pandemic, says Arthur Carvalho of Truxt Investimentos, a hedge fund in Rio de Janeiro. In order to pass health-and-stimulus spending worth 8% of GDP, Congress suspended a constitutionally mandated “fiscal ceiling”, which limits annual spending growth to the rate of inflation. The real fell by nearly a quarter early in the pandemic but then stabilised. Public debt grew to 89% of GDP in 2020 but, thanks to the stimulus, the economy shrank by only 4.1%, less than in most emerging markets.

Economic liberals hoped that this year, lawmakers would at last approve Mr Guedes’s proposals to boost growth and curb spending. In January allies of Mr Bolsonaro gained control of both houses of Congress. Tax and public-sector reforms started to advance. The government celebrated some victories, such as a law that formalised the independence of the central bank and a constitutional amendment that allowed private investment in sewerage works. The lower house approved a watered-down tax reform on September 1st. Despite a brutal second wave of covid-19, the main stockmarket index hit a record high in June after news that GDP grew by 1.2% in the first quarter. Public debt fell to 84% of GDP.

“Everything is getting better,” said Mr Guedes. Markets seemed to agree. “Guedes is a hero,” says Pedro Albuquerque, the CEO of TradersClub, a startup that erected a statue of the minister dressed as the Mandalorian, a bounty hunter from a television series. But Brazil has its own version of Wall Street v Main Street. Amid cheers on Faria Lima, an avenue in São Paulo that is home to big banks, unemployment eased only slightly from a record of 14.7% in the first quarter of this year to 14.1% in the second quarter. Household consumption is still below the level of early 2019. Year-on-year price inflation is 9% overall and more for staples like rice (40%) and sugar (30%), owing to the increase in commodity prices. “My youngest son drinks a lot of milk but I have less and less to give him,” says Thais Santos Nascimento, who lost her job cleaning long-empty offices in June. Mr Bolsonaro’s approval rating has been falling since monthly cheques to poor people were slashed at the beginning of the year. It is now less than 30%.

In an attempt to regain support, Mr Guedes has turned his attention to his boss’s orders to “turbo-charge” Bolsa Família (“Family Fund”), a cash-transfer programme to reduce extreme poverty. The government wants to expand the pool of recipients from 14.6m to 16m, raise the average monthly payment from 189 reais ($36) to 284 and give the programme a new name, Auxílio Brasil (“Brazil Aid”), so that voters associate it with Mr Bolsonaro rather than ex-president Luiz Inácio Lula da Silva (2003-10). Lula was president when Bolsa Família was first launched and is expected to run for the office again against Mr Bolsonaro next year. (Polls show him winning.)

But as Congress heads into budget talks, Mr Guedes is struggling to figure out how to dole out more cash without busting through the reimposed spending cap. At first he wagered that inflation would slow in the second half of the year. This would provide a fiscal boost, since the spending cap rises in line with the inflation rate in the middle of the year, whereas increases in some salaries and benefits paid by the government depend on the inflation rate at the end of the year. But inflation has stayed high.

Mr Guedes’s next idea was a constitutional amendment that would postpone court-ordered debt payments to lower tiers of government to circumvent the spending cap. This strikes many as fiscally reckless. Marcos Mendes of Insper, a business school in São Paulo, helped design the cap. He says it was needed because prior laws to promote fiscal responsibility had been amended to the point of irrelevance. “The worry is less about the numbers and more about what would happen to the debt trajectory if the mechanism were to fail,” he says. Neither the controversial amendment nor extra spending for Auxílio Brasil were included in a budget draft submitted to congress on August 31st, but both are still on the table.

Other worries are also contributing to a worsening outlook. Brazil’s worst drought in 90 years has curbed hydropower, sending electricity prices soaring and raising fears of blackouts. The tax reform faces uncertainty in the senate; other reforms have stalled again. In June Congress was consumed by an inquiry into the government’s handling of the pandemic, which turned up allegations of corruption in vaccine deals. More recently it has been distracted by Mr Bolsonaro’s threat to suspend next year’s elections if legislators don’t pass a bill to introduce paper ballots. When such a bill was rejected, the president called for protests on September 7th.

For the past three weeks, the central bank’s poll of economists has trimmed their prediction for growth in 2021, to 5.2%. The markets have gone into reverse. Share prices have fallen by 11% since June and the real has depreciated by 6%. The sell-off followed a dip in commodity prices and fears that the Federal Reserve would soon raise interest rates, again sucking money out of Brazil and other emerging markets. Those fears have eased but they exposed “problems Brazil was sweeping under the rug”, says Zeina Latif, an economist. The government’s borrowing costs are rising: the yield on its ten-year bonds hit double digits for the first time since the election in 2018.

Still, financial markets are fickle and Brazil’s economy always seems to be “on the edge of a precipice”, points out Joaquim Levy, a former finance minister. It usually manages to pull back. In 2015 he was in a similar position to Mr Guedes, working for a president, Dilma Rouseff, who backed away from economic reforms. That deepened the recession of 2014-16. Mr Levy reckons that Brazil is better off now because lawmakers and society better understand the need for fiscal restraint.

If reforms do pass before attention shifts to the election, they are likely to be half-hearted. Congress is considering several tax-reform bills. The one that succeeded in the lower house on September 1st is not the business-friendly bill that would merge several levies into a simplified value-added tax, but rather a populist proposal to lower income tax for middle-class Brazilians. It broadens the tax base by introducing a tax on dividends but also adds new distortions. Meanwhile, a bill to reform the public sector by making it possible to fire deadbeat workers, among other things, would provide long-term savings but is a longshot. Privatisation of the postal service, which passed the lower house in August, is set to be voted on by the Senate in September.

Second-quarter GDP figures, which were released on September 1st, showed a decline of 0.1%. Of 30 large economies tracked by the OECD, a club of rich countries, Brazil was the only one that did not grow. Itaú, a bank, predicts that annual growth will fall to just 1.5% next year, “as the factors that drove growth this year wear out”. That may be enough to keep Brazil away from the cliff, but for those who expected Mr Guedes to lead it to sunny uplands, it is a disappointment. Once again Brazilians will have to lower their expectations. ■